There are many techniques in machine learning that rely on estimating how likely the occurrence of an event is. For instance, we often want to be able to determine predictive relationships; perhaps when event {$A$} occurs, {$B$} generally follows. Or, we might have a complicated model of a million possible events, and wish to simplify the model by allowing it to neglect the least likely events. Both of these scenarios rely on the fields of probability and statistics.

To start out with, we need to define some terms, which is simpler to do with an example. So, imagine you have an oddly shaped stone, like so: 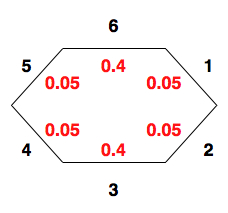 A strangely shaped stone, used as a die.

The black numbers are the values of the 6 sides of the stone, and the red numbers denote the probability that the stone will land with a particular side facing upwards on any given toss, where a toss is the "experiment" we're interested in. In probability, the term sample space is used to mean the set of all possible outcomes of an experiment, and is usually denoted by {$\Omega$}. In this example:

Because the stone has no memory (it doesn't record past tosses), each toss we make is independent of all other tosses. Even if we've tossed the stone five times and gotten a 6 every time, this doesn't mean we're any more likely to get one of the other numbers on the next toss; probability of a 6 is still identical to what it was originally --- 0.4. If we toss the stone many times, recording how often each number comes up, our record will be distributed over the six possible events. These facts together form a term we'll see frequently in this class: independent and identically distributed (often abbreviated i.i.d). For many problems we'll encounter later in the semester, we'll make the assumption that data is i.i.d.; this is because if we have data that is NOT i.i.d., the computational complexity rises sharply, becoming intractable for all but the smallest of cases.

When we consider tossing the stone, we might also be interested in something more complex than just the probability of any single side. For instance, we might want to know how likely it is that a toss results in any even number. In this case, the "event" we're interested in is a toss that results in 2, 4, or 6. In general, the term event is used in probability to refer to any set of zero or more outcomes. Any event you can define, you should be able to combine the probabilities of the most basic events to determine the chance of your more complex event. This is what we'll assemble some tools for accomplishing in the rest of this recitation.

and the probability that it will be prime is:

If we try adding these two results together, we get {$0.5 + 0.5 = 1$}. But it can't be the case that probability of being odd or prime is 1, since the stone has some chance of landing with the 6 side facing up. The issue here is that we counted {$p(3)$} and {$p(5)$} twice in our sum. We need to make sure that we don't count the same outcome twice. And so we have the following rule:

Random variables are rather poorly named; they are not really random, nor are they really variables. Rather, they are more like functions that assign a unique number to each possible outcome of an experiment. In the case of the die above, the mapping is so straightforward as to be trivial. If we use X to denote our random variable in this case, then:

So, X just maps "if x faces up after the toss" to the number x. That is, {$X: \Omega \rightarrow \{1, 2, 3, 4, 5, 6\}$}. In the case of other experiments, the mapping can be less trivial. For instance, what if instead we had a coin and the experiment under consideration was a flip of this coin? Then the outcome space would be the set {$\{\textrm{heads}, \textrm{tails}\}$}. One possible way to map these outcomes to numbers would be:

Or, consider what the outcome space would be if we instead said that every "experiment" consists of 2 coin flips. Then our random variable would need to be a function from HH, TT, HT, TH to unique numbers, say 1, 2, 3, 4.

In general, we'll be pretty loose with notation, so we might say a random variable takes on the value "heads" or "tails" when formally it should be mapped to a unique number. You don't need to worry too much about it for this class.

Distributions are sometimes visualized with Venn diagrams. In the picture below, we have a binary random variable {$X$}, which can take on one of two values: a default value that is written as {$X$}, and the opposite value, {$\sim\!\! X$}. The area inside the circle represents the probability that {$X$} equals the default value, and the area outside the circle represents the remainder of the probability mass. 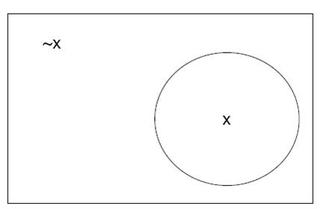 Diagrams can get more interesting as we add more random variables ... 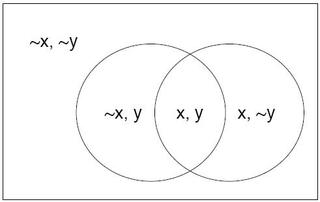 If there are more than two random variables in a distribution, then it is called multivariate. Now that we have established some basics about what distributions are, let's look at a couple of measures that are often used to "summarize" them. First of all, there is the expected value of a distribution, also called the mean. It is exactly what you would expect --- the average value of the distribution. For a discrete variable {$X$}, this is defined as:

So far the event combinations we considered are essentially just unions or intersections. What if instead we already know that a particular event occurred, and given that information want to know what the probability of a second event is? For example, if someone tells me that the last stone's throw resulted in a prime number, what is the probability that it was odd? First, let's call the event that the stone is prime {$A$} and the event that it is odd {$B$}. We want to know "probability of {$B$} given {$A$}". What does knowing {$A$} do for us? It reduces our outcome space to just 3 values: {$\{2, 3, 5\}$}. Since the total probability of an outcome space must sum to 1, we simply re-normalize:

To see why this is true, note that applying the definition of conditional probability twice gives us two definitions of {$p(A \cap B)$}:

and setting these two equations equal we get:

which, with a little algebra is:

This is known as Bayes rule. We'll use Bayes rule a lot in class, so be sure to check out the examples of its use at the end of this page.

This general formula is called the chain rule, and we will also be using it fairly often in this class.

In the introductory example with the stone, we mentioned the term i.i.d, independent and identically distributed. There, the term "independent" referred to the fact that two different samples from two different stone tosses did not affect each other. If you think of two tosses as two random variables {$X$} and {$Y$}, we denote that they are independent by {$X \perp Y$}. Formally, two random variables are independent if and only if {$p(X \cap Y) = p(X)p(Y)$}. From this definition, it's easy to see that we also get the following properties:

Some random variables that are not independent are still conditionally independent. Suppose {$X$} and {$Y$} are not independent, so knowing {$Y$} changes our belief about the probabilities of the values {$X$} can take on. Now, there may exist a third variable {$Z$} such that once {$Z$} is known, knowledge of {$Y$} does not change our belief about {$X$}. This conditional independence is denoted {$X \perp Y \mid Z$}, and it implies the following properties:

Here's an intuitive example of conditional independence: Suppose you have a flight to catch, and {$M$} represents missing your plane, {$T$} represents that you encounter a swarm of tarantulas on the road to the airport, and {$S$} represents that you are gifted with the superpower of being able to drive through tarantula swarms without even slowing down. Now, without knowing {$S$}, knowing {$T$} might make me more inclined to believe you missed your plane. Similarly, without knowing {$S$}, knowing you missed your plane might make me more inclined to believe you encountered a swarm of tarantulas. However, if I know you have the superpower {$S$}, then knowing {$T$} doesn't have any effect on my belief about whether you made your plane or not.

The two child problem asks the following question: I have two children, and at least one of them is a son. What is the probability that both children are boys?

Now for a more difficult problem in the same vein, the Tuesday child problem. The problem is this: I have two children, and at least one is a son born on a Tuesday. What is the probability that I have two boys?

Case 1: First, let's assume the first child to be a boy born on a Tuesday. Then the second child could be a boy or a girl and could be born on any day of the week. This would give us 14 possibilities, with 7 "good" events (both children boys) out of 14 possible.

Now let's repeat this computation, but using Bayes rule. First off, we'll define some notation for the interesting events:

Our goal then is to compute:

Now, to calculate {$p(B)$} we need to first calculate the conditional probability that at least one child is a son born on a Tuesday, given that the children are BB, BG, GB, or GG. The picture below should help make these computations clear: 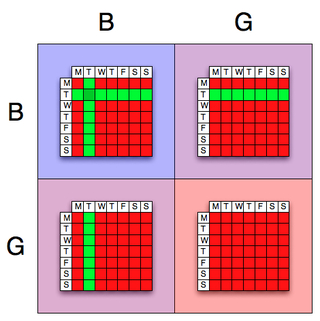 Finally, we can apply Bayes rule:

Suppose you are thinking of going to the beach. Let's have {$B$} denote that you go to the beach, and {$\neg B$} denote that you do not go. Also, let's have {$I$} represent the event of eating ice cream, and {$D$} represent the event of drowning. Assuming {$I$} and {$D$} are conditionally independent given {$B$} or {$\neg B$}, determine whether {$I$} and {$D$} are also independent, using the five probabilities below.

You are in a game where you are asked to choose one of three doors. There are goats behind two of the doors and a car behind the other door. If you manage to pick the door with the car behind it, you get to keep the car. The game goes like this: First, you have to pick one of the doors. Then, the host of the game will open one of the other two doors, behind which there is a goat. The host then asks you if you want to change your first choice of doors, to the other unopened door. The question is, is switching to your advantage?

Intuitively, most people would say that it doesn't matter if you switch or not. However, switching your choice will in fact double your chance of winning the car. Let's examine why this is the case. At the time of your initial door selection, the probability that you select the car {$C1$} is {$\frac{1}{3}$} and the probability you select a goat {$\neg C1$} is {$\frac{2}{3}$}. Let's call the event that you end up with the car after your second door selection (either switching or not switching) {$C2$}. We'll compute {$p(C2)$} for both the switching and not-switching scenarios to show that switching is better.

If you switch then:

So, overall we have that:

In the other scenario, where you don't switch, we instead have that:

Thus, switching is twice as likely to win you a car as not switching. Back to Lectures